On Posted on January 12, 2021August 27, 2021 by The Canyoning Company to Canyoning, Canyoning Scotland

Bruar canyon is located at the Falls of Bruar in the Atholl estate, Perthshire. It has exquisite waterfalls, rock features and surrounded by beautiful pine forest. The falls have carved they're way though the sandstone (psammite) landscape creating beautiful rock sculptures. Bruar is a very special place for canyoning in Scotland. It's first descent was over 15 years ago and was one of the first commercial canyoning venues which opened in Scotland. The Bruar canyoning experience is one you will remember forever, and will leave you hooked on the sport. That’s a promise. If you fancy a canyoning trip at Bruar CLICK HERE. 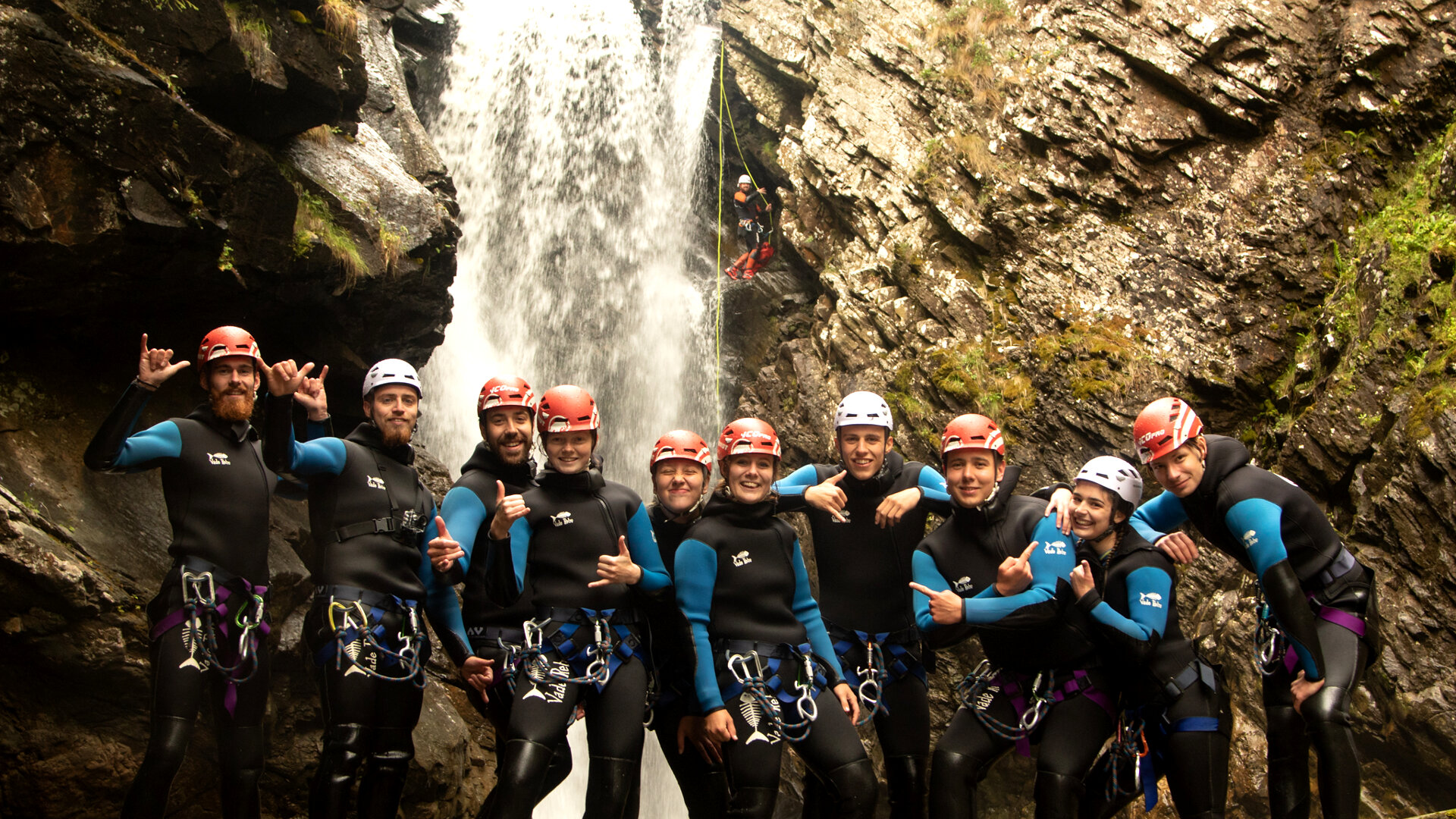 Rated 4.8/5 ★★★★★ based on 11 customer reviews
£65 per person
This canyon has everything to offer; awesome jumps ranging from 2meters to 10meters, flumes, vertical rock slides and awesome waterfall abseils. Bruar Canyon is non stop fun, with something for everyone! The canyon has a footpath running up the side, so its great for friends or family to come and watch, take photos and enjoy the canyon from a distance.
Life Changing - by Mickey, April 1, 2020
5 / 5 ★★★★★
I am the happiest mouse now I have found my gummies 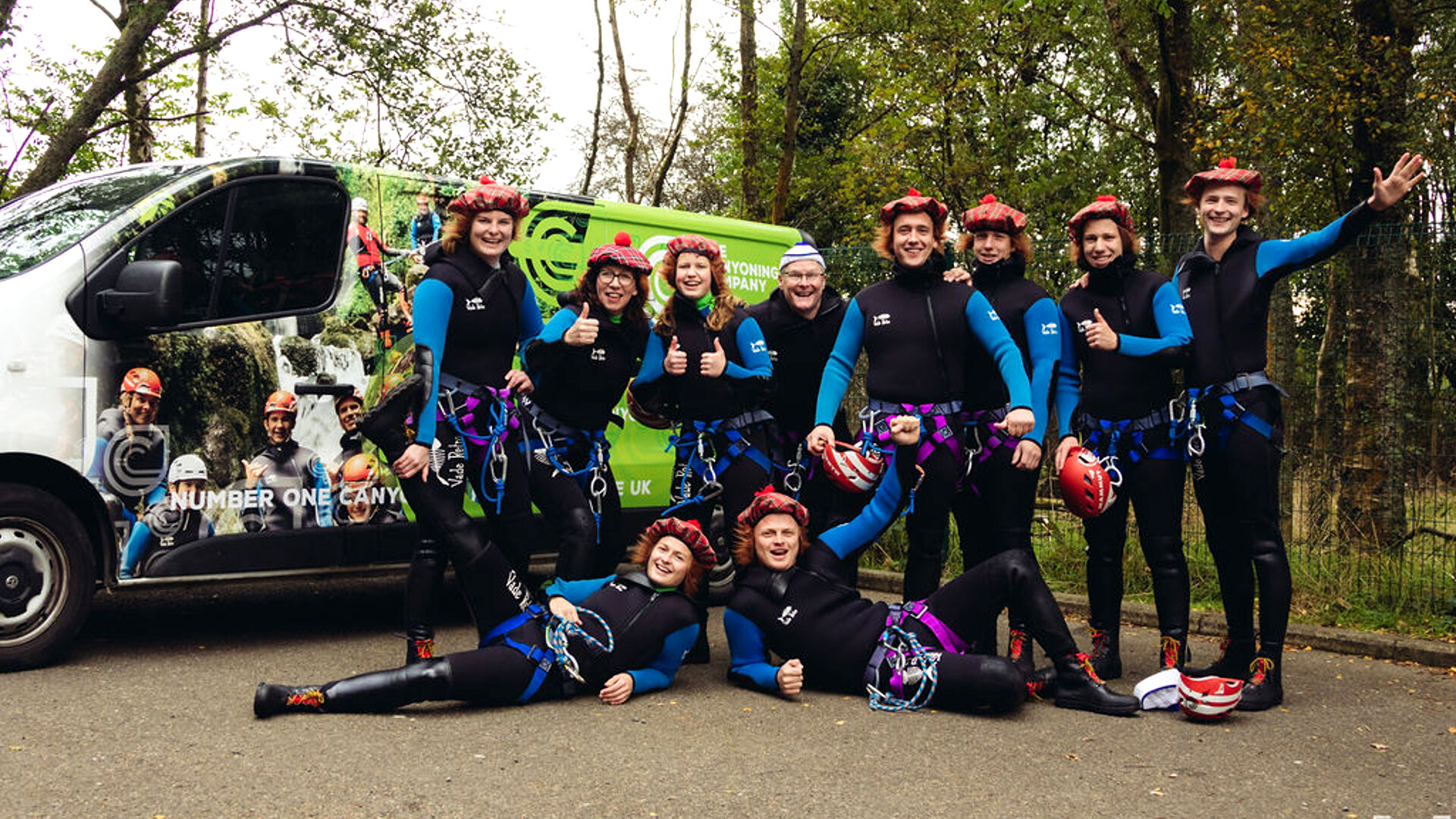 4.8/5 ★★★★★ based on 11 customer reviews
£tbc per person
Let us organise your very own private canyoning tour. Immerse yourself in Scottish culture; sample the finest ales and whiskies in the best pubs and inns; eat the freshest produce and experience the warmest hospitality you can find and of course, enjoy breath-taking scenery in the most stunning canyons in Scotland.
Life Changing - by Mickey, April 1, 2020
5 / 5 ★★★★★
I am the happiest mouse now I have found my gummies

The point is,
I can't wait to book my next adventure and jump even higher! read less

What a great day and experience.
Amelia and Rory were first class right from the start of our canyoning trip.

They were friendly, helpful and informed us of everything we needed to know at all times while making the whole trip great fun.

Thanks to ... read moreWhat a great day and experience.
Amelia and Rory were first class right from the start of our canyoning trip.

They were friendly, helpful and informed us of everything we needed to know at all times while making the whole trip great fun.

Thanks to both Amelia and Rory for your patience and support to help me with my last jump.
We thoroughly enjoyed every part of it.

This is a must trip and we can't wait to get back and try the next level. read less

Class Canyoning What a great day we had with Amelia and Rory.
Right from the start they were friendly and helpful.
They both made every effort to ensure that everyone on the trip enjoyed themselves and experience canyoning in a safe and fun way.

The best part f... read moreWhat a great day we had with Amelia and Rory.
Right from the start they were friendly and helpful.
They both made every effort to ensure that everyone on the trip enjoyed themselves and experience canyoning in a safe and fun way.

The best part for me was the last jump which pushed my limits but Rory and Amelia were both great being patient and encouraging to help me make the jump.

Thanks, you both gave us all a great experience.
First Class read less

We did Bruar falls with a big group (age range 25-69 yrs) and had so much fun with the canyoning company! Everyone felt very taken care of - Amelia, Ben and Rory are absolute experts and fantastic guides, thank you so much!

Absolutely fantastic canyoning experience with Ben. The most professional, knowledgeable and friendly fella.

I was up for a challenge and the girlfriend was really nervous, but he handled us both admirably and gave us both the best time, no easy ta... read moreAbsolutely fantastic canyoning experience with Ben. The most professional, knowledgeable and friendly fella.

I was up for a challenge and the girlfriend was really nervous, but he handled us both admirably and gave us both the best time, no easy task.

Great equipment, brilliantly organised and great instructor. I can’t wait to come back. Thank you so much again Ben. read less

Awesome team and a must have experience p

Brilliant time at the Bruar canyon on Saturday, our instructors were very helpful and clear at letting us know what to do and how to do it. Cheers again 👍🏼👍🏼

Typography is the art and technique

A history of the Falls of Bruar

The falls were came after the retreat of the glaciers at the end of the last Ice Age. Erosion carved the rock forming the waterfalls some 500 million years ago. The layering of the rocks means that the water has cut a meandering path through the softer rock and left the harder rock untouched. This has led to the creation of deep pools, outcrops and, in one place, a natural arch. The falls consist of two large falls and a number of smaller drops. After days of dry weather the water is crystal clear, but after rainfall the water can often be brown from the peat in the ground. The falls first became popular as a tourist attraction at the end of the 18th century. At that time, the Bruar Water flowed through a treeless, barren landscape, and the falls were said to be a somewhat disappointing sight for those forced to make their way over the slippery rocks and steep banks to view them. The total drop of the falls is about 60 metres. The narrowness of the gorge means that the falls are most impressive after heavy rain, but since the construction of a hydroelectric power scheme in the late 1940s, water is extracted farther up the river and the falls no longer reach the volumes they once did. Robert Burns, although taken with the falls themselves, was unimpressed by the lack of vegetation. After his visit in 1787, he wrote the poem,The Humble Petition of Bruar Water to the Noble Duke of Atholl. Burns pleaded with the Duke of Atholl, the owner of the land, to plant some trees and bushes around the falls. Almost ten years later, after Burn's death in 1796, Murray planted 120,000 Larch and Scots Pine.  He also built the path that is still in use today, constructed the two bridges as viewpoints over the falls, and built a large number of huts and shelters. Recently hundreds of trees have been cleared due to the spread of disease; Phytophthora Ramorum which threatens Scotland’s larches. Now the conifers are mixed with Mountain Ash, Willow, Aspen and Birch. 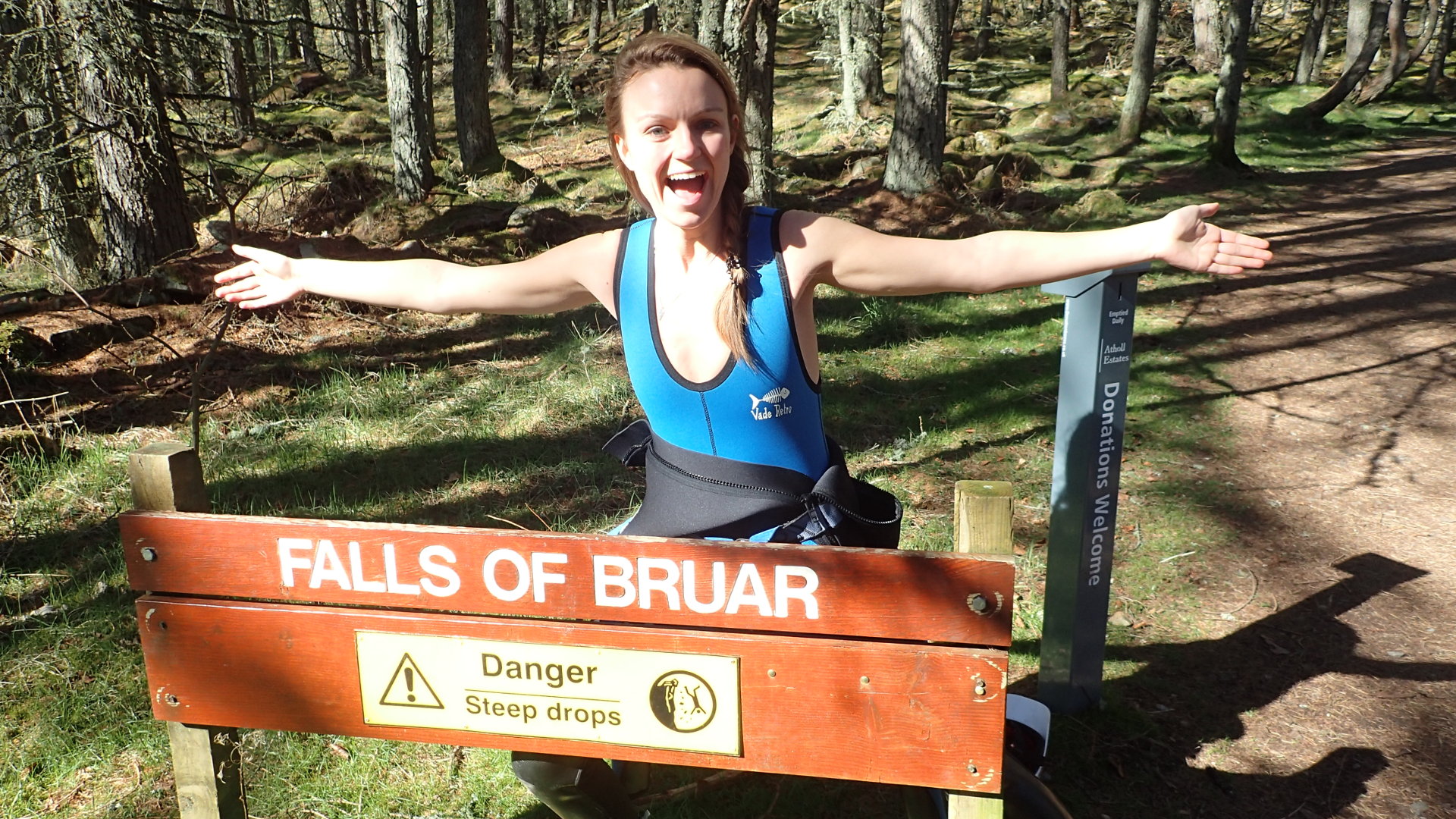 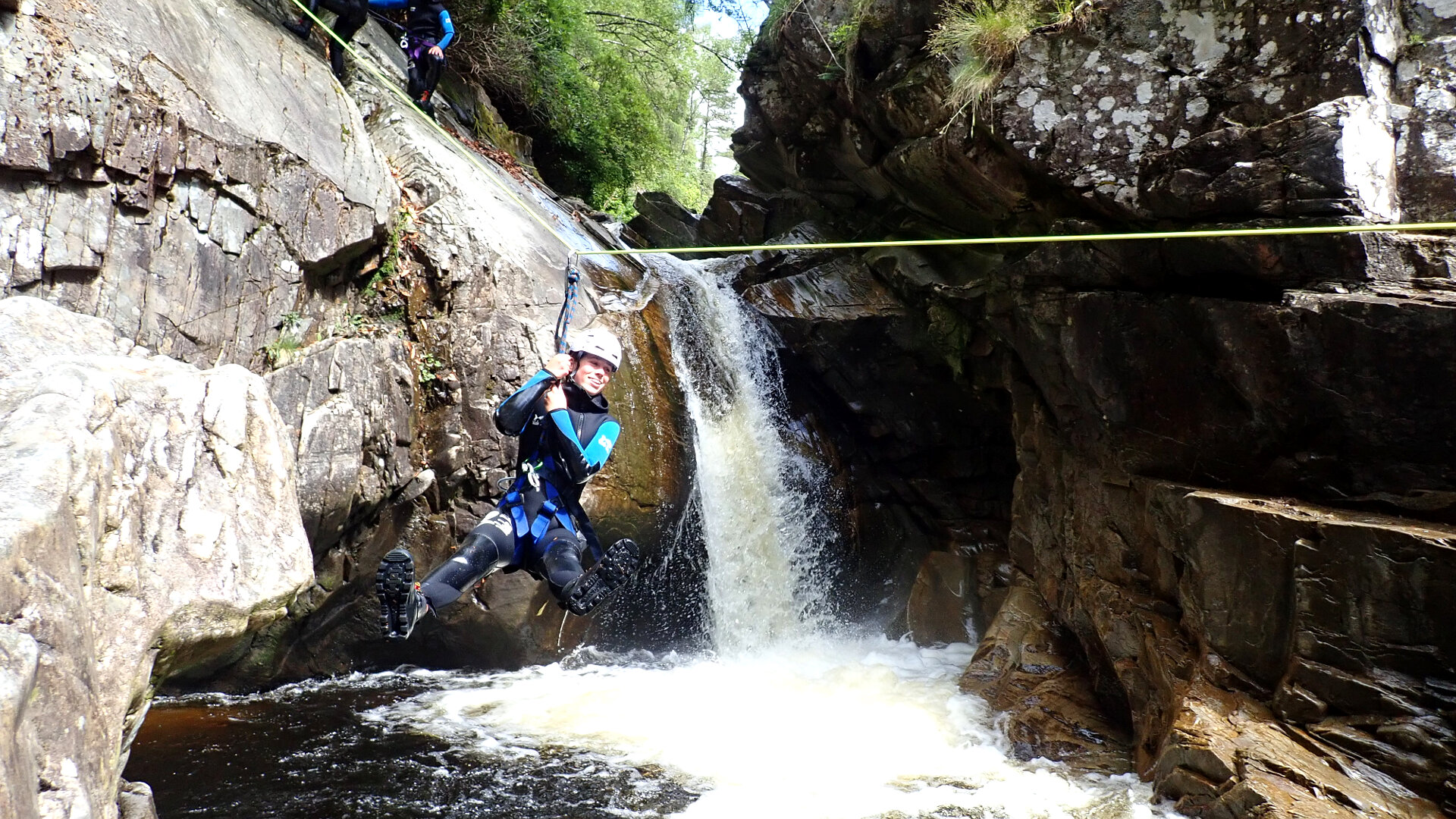 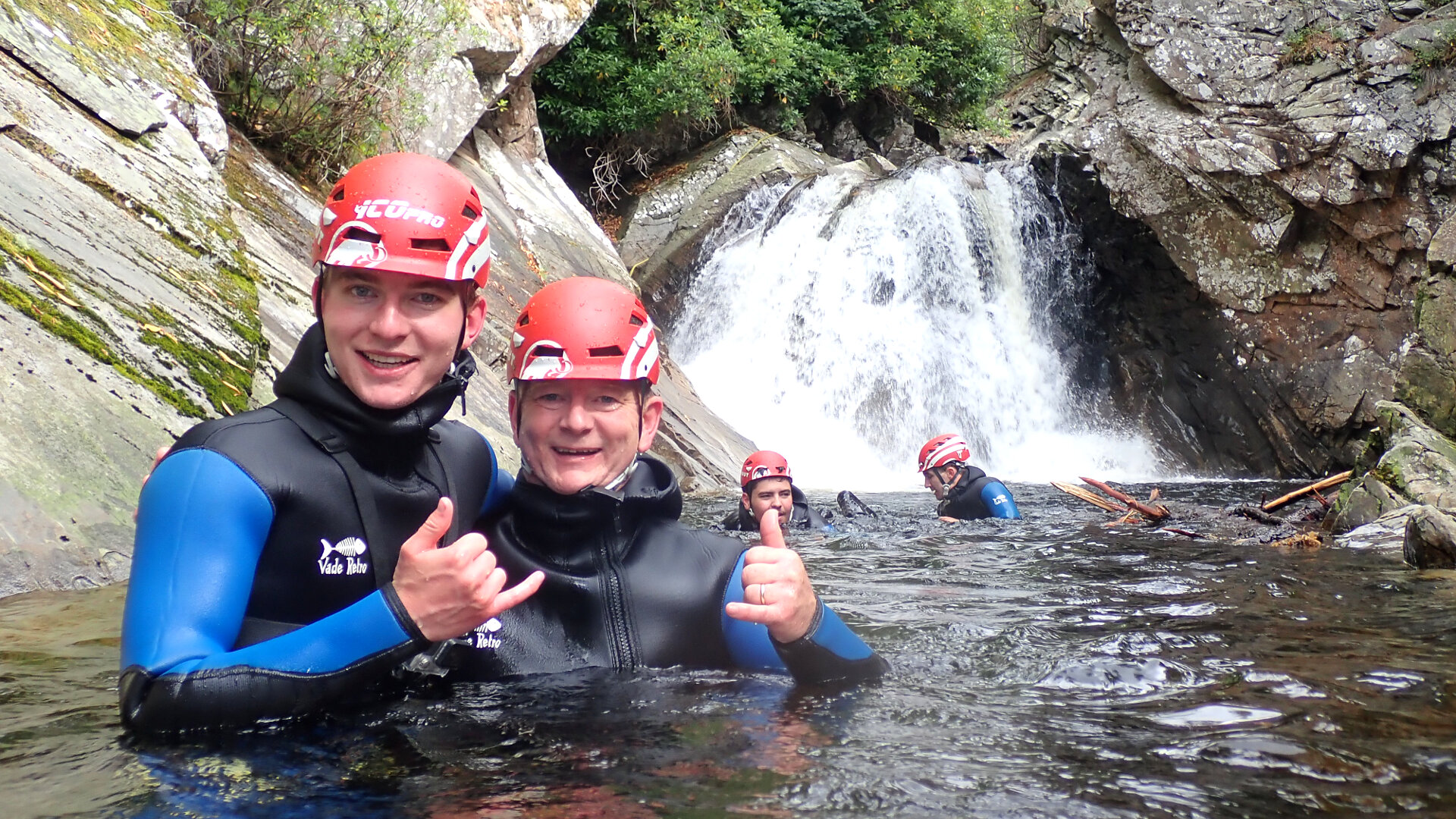 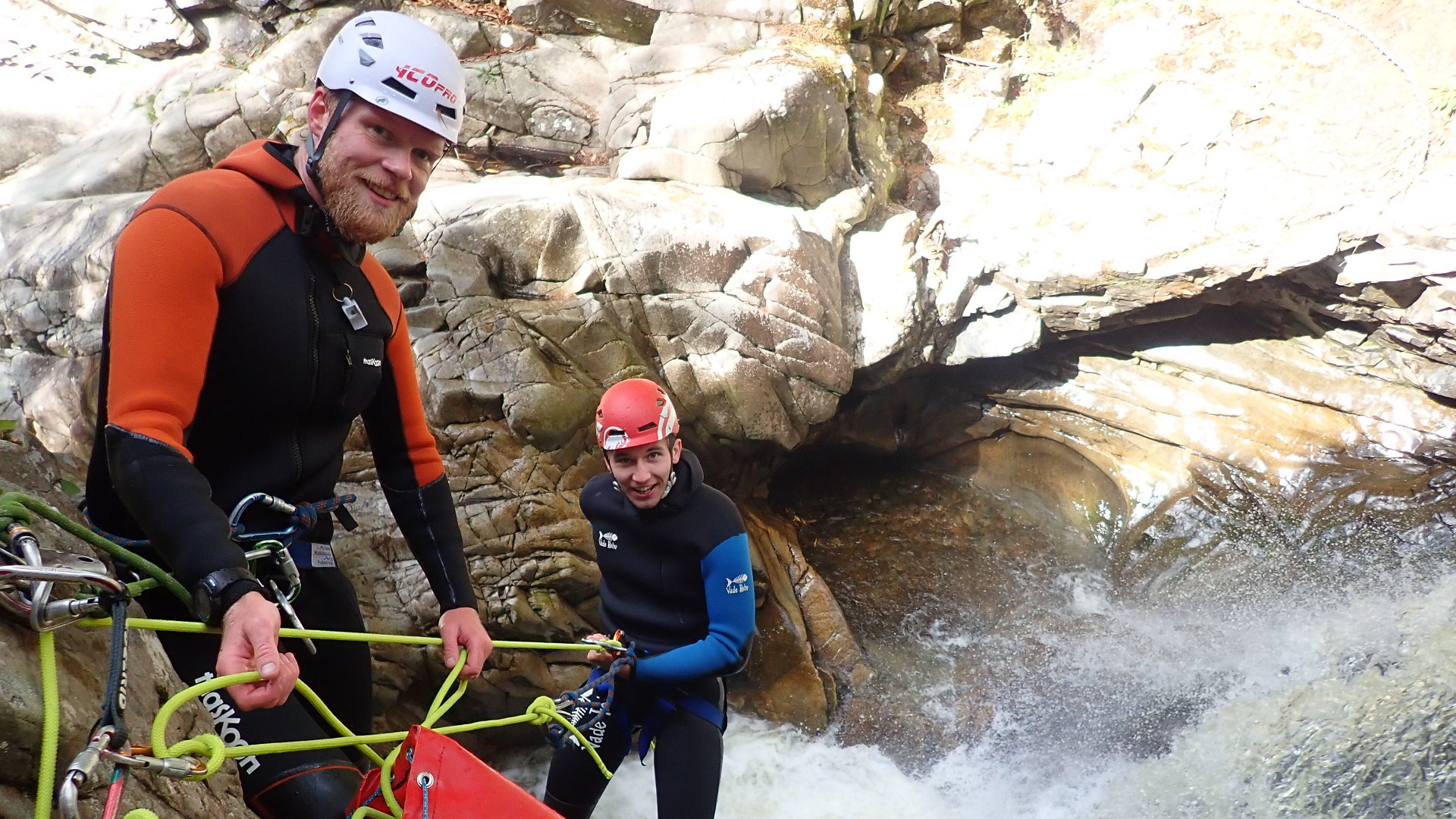 Canyoning is a perfect mix of different outdoor activities. But although canyoning uses a mixture of skills it has its own specific way to do things. It involves rock climbing skills, as there is often abseiling and rappelling. Swimming is an important part as most canyons have water in them.

Canyoneering is an adventure activity. It combines rock and water activities into a sport full of adrenaline and natural beauty. When you go canyoning you will be trekking through river gorges. You will also explore around rock pools and behind waterfalls. You will find yourself abseiling down waterfalls as well as tackling cliff jumps into stunning water rock pools.

At The Canyoning Company we pride ourselves on achieving and maintaining the highest standard of Canyoning certification as we can.

Providing training and resources to a range of private sector and public sector organisations we also provide help with outdoors training, health and safety as well as knowing how to make your adventure a memory to remember.

ACHARN CANYON Acharn, Loch Tay, Perthshire, Scotland Discover / Family“It’s got it all! With an epic finish” Based along the shores of Loch Tay is Acharn Canyon. This is a really fun, non-committing gorge which will be sure to leave you with big smiles. Acharn Canyon has some fun technical jumps and one awesome natural…

ALVA CANYONAlva, Stirlingshire, ScotlandAdvanced“One of the best slot canyons in Scotland”Alva gorge is a fantastic, committing slot canyon situated close to Stirling. This trip is a real exploration of discovery. The canyon involves numerous rappels including a zip line into smugglers cave. The penultimate waterfall ‘corkscrew falls’ will leave you totally buzzing.This canyon is not…

BRUAR CANYON Bruar, Perthshire, ScotlandDiscover / Family“Scotland’s Classic”15 mins from Pitlochry the famous Bruar Falls flows through the Atholl Estate. Bruar is a very special place for canyoning in Scotland. Its first descent was over 15 years ago, and was one of the first canyoning venues opened in Scotland. It has exquisite waterfalls and rock…

DOLLAR CANYON Dollar, Stirlingshire, ScotlandDiscover / Family“A stunning slot canyon, with everything to offer!” Dollar canyon is one of our most popular trips. It is great for beginners or intermediates and just 45 minutes from Edinburgh. Dollar canyon is very accessible and holds some awesome features; with jumps up to 5 meters, epic natural water…

We are here to help make your outdoor adventure experience an amazing memory to enjoy so, please get in touch for all the information you need.